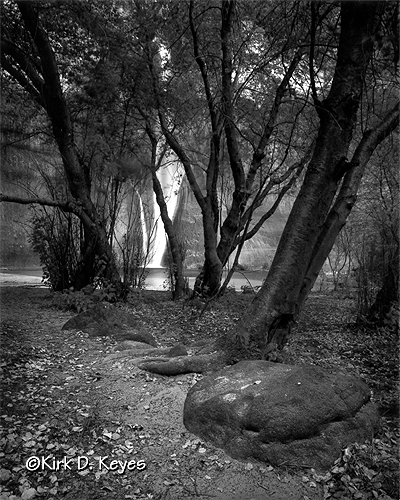 About the Moment: Although it was the first week of October, the noon time temperature was in the high-eighties (°F). The round trip distance to the lower falls is 5.5 miles – the sandy trail and temperature was noticed. I told Jeanne that if I died, to put this inscription on my gravestone – They said it was a flat trail, relatively.

As you approach the falls, the trail makes a turn to the left, leaving behind the desert environment of the juniper, pinyon pine, and prickly pear cactus. It then quickly leads you into the microclimate which surrounds this waterfall. The increase in humidity and the decrease in the ambient temperature caused by the 126-foot-high falls was immediately apparent. Calf Creek Falls is an unexpected oasis in the middle of the desert.

As I walked down the trail I noticed this framing (I’m always looking for photos – I’ve slammed the brakes on the car while driving at 70+ mph for photos several times) and I continued on down to edge of the pool to look at the falls. I looked around a bit then and proceeded back up the trail to take the photo from this vantage point. I’ve yet to see any photos from Calf Creek that are anything other than an up-front portrait of the actual falls.
I took this photograph in color as well, and I prefer it in B&W. The color was just a little overexposed (from how I like to expose film, but it is still acceptable) and it does look nice, but the B&W does seem to add to the image. When I was processing the B&W film from this trip, I noticed that this negative even looked good just as a negative. I find that my favorite B&W photos of tend to do that.

The image is a bit odd in that the main objects of interest are tonally dark and surrounded by generally lighter areas. I really like the richness of these tree’s bark. (Adjust your monitor brightness if the tree’s bark appears black.)

One aspect (or I suppose it is merely a photographic device – like a literary device) that I like about this photo is that the falls are definitely not the centerpiece of the image, despite being nearly physically centered in the photograph. I find that the counter-posed trees draw the eye from the top half of the image to the lower center where the viewer encounters the line created by the receding rocks and the trail – which then brings your eye back into the trees on the left side – thereby allowing the process to repeat itself. I find photos that have this property – drawing the eye around in repeating patterns through the image – are ones that I often find to be very interesting.

Calf Creek Falls is nearly dead center in the state of Utah. After Delicate Arch, I bet this waterfall is one of the most photographically published spots in Utah. If you have ANY brochures from Utah or photo books of the region, there is nearly always a photo from this place.