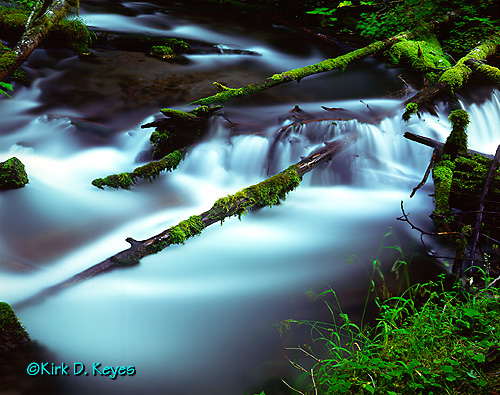 About the Moment: My friend Phil called up one day and suggested that we go out shooting, and he suggested that we bring my 8×10. He had borrowed a 300 mm lens and bought some film – how could I refuse? When he arrived, we tested the bellows for light leaks. It was in pretty bad shape. Actually, it was not too bad for a camera that was made during World War I. That afternoon, Phil and I spent about 1½ hours taping up the bellows with black gaffers tape to make the camera field worthy.

Phil then recommended that we hike to a waterfall that he had been to earlier in the year. My wife Jeanne and I agreed since we had not been there before. Phil is into waterfalls, and has been to the majority of the notable ones in Oregon and Southwest Washington. We took two photos that hike, one at a location chosen by Phil and one at this location (my choice). After the film was processed, we all agreed that this image was the better photograph.

This spot was not at what would be considered a typical photo location. It is on the side of the trail and the change in elevation of the cascade is less than a foot. I was attracted to the interplay of the two diagonal lines formed by the trees cutting across the circular shape created by the pool of water. The swirling lines of the water keeps your eye in the body of the image. The water dropping over the cascade also had a very appealing transparency and luminosity. This scene was shaded from direct sunlight which I think helps immensely for photos like this one. Additionally, I liked the little green ‘island’ of grass in the foreground.

Velvia was the perfect film for this image – the combination of the white water and the green of the grass and moss are ideal subjects for Velvia. Unfortunately, one cannot see the level of detail in this image over the Internet. The detail in the moss on the mid-stream branches is amazing – you can see the strands of moss and tiny droplets of water hanging from them. Even being accustomed to 4×5 film resolution, 8×10 transparencies still amaze me some times.

Filters, Effects, Digital Manipulations: A polarizing filter was used to reduce glare on the water and saturate colors. Exposure for this image was 6 minutes at f/64 to get sufficient depth of field to include the grass in the foreground. No digital manipulations were used to produce this photograph.