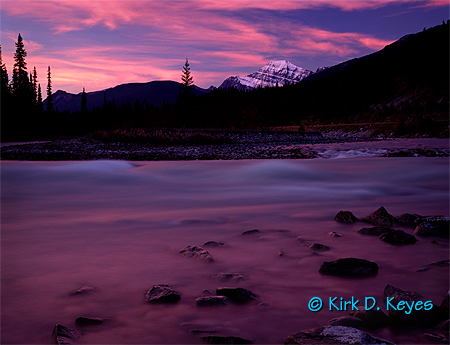 About the Moment: The previous evening it looked like it was going to have a rather bland sunset, so Jeanne and I went to dinner instead of finding a subject for taking sunset photos. As we exited the restaurant, the sky was at the end of a spectacular display – the best one of the entire trip. I decided that I had better get up early the next morning and make sure I was ready in case a similar sunrise occurred. As you can see from the image, it did. This image is one out of a set of four taken over about 15 minutes that morning, with each image showing a slightly different yet interesting coloring.

Filters, Effects, Digital Manipulations: A polarizing filter was used to reduce glare and saturate the color of the blue sky against the clouds. A shutter speed of approximately 15 seconds created the ethereal effect on the water’s surface. No digital manipulations were used to produce this photograph.